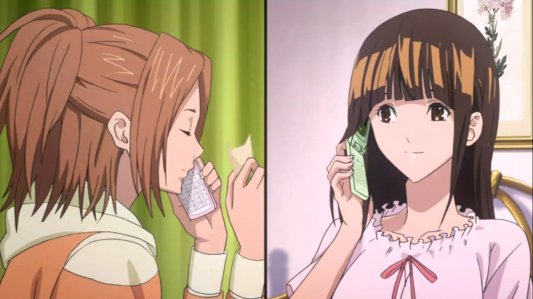 How many of you are doing the countdown?  The next chapter is it, right?  Maybe I should take a long break after this update. 😉  LOL. Just kidding.

Anyone else think that Toupai is black belly in this chapter?  Smooth move Toupai.  That was very subtle…

Beneath that original post, many of the people who knew Gu Sheng were starting to madly @ her in the comments.

Fortunately, this was just an unknown fan, and the number of people who reposted the message was relatively small. At least, within this last half an hour, there had not been too many reposts or comment replies. Gu Sheng nonchalantly glanced at this poster’s Weibo profile. She swore, anyone who saw this Weibo tweet would definitely do the same thing.

She touched the cold back of her hand to her face, still feeling that this was all unreal…

Such a strangely remarkable feeling.

In an instant, Toupai seemed very close and dear.

A man who had both a gorgeous voice and a handsome appearance could basically be considered a rare phenomenon, you know?…… If God bestowed on you a nice voice, he would also give you an ordinary face. This was the biggest, regretful conclusion she had come to after looking at many photographs of radio DJs and people in the entertainment circle. However, she was a voice lover anyway and had no real criteria for a man’s face, and she also saw nothing wrong with this…

But, Toupai’s voice… paired with an attractive face! That was absolutely going against the natural law of things!

Because of this Weibo tweet, Gu Sheng spent her entire lunch digesting the news that she and Toupai were in the same city.

After lunch, she laid down on the couch with her laptop on her knees, listening to the songs people had sent to her and following along with the lyrics while she practiced the melody. Her mind was somewhat preoccupied so she was constantly muddling up the lyrics. After singing the wrong words several times in a row, she finally could not help picking up her mobile phone, and she noticed that her most recent contact in WeChat was still Toupai…

She cleared her throat, wanting to send a message.

But what should she say? To actually ask him if he really was in the same city as her? And then throw in a stirring sigh and exclaim, “DaRen, such a coincidence, ah…”?

She continued gazing at the screen and humming her songs.

Fine. Actually, she just continued being preoccupied and unfocused.

After repeatedly getting the lyrics wrong, she was starting to go crazy with frustration, but luckily, Geng Xiaoxing’s timely phone call came. “Dear Sheng Sheng Man Dada, are you free? I have something totally awesome for you to listen to.”

“The storyline song that our website and Wanmei collaborated on. It’s out.” Geng Xiaoxing was extremely excited. “Not that ‘Sword Cry in the Land of the River and Lakes’ song of yours… Hey, wait. Yours was supposed to be a pre-event warm-up. How come it hasn’t been released yet? Our actual main attraction is out already.”

The storyline song was not song by Gu Sheng, so naturally, she would not know what its progress was.

However, she recalled how all of this happened.  It had started with Geng Xiaoxing and herself planning this. And then, Wanmei joined in… And then, they decided to do a storyline song… And then, they decided to do a pre-event warm-up by releasing “Sword Cry in the Land of the Rivers and Lakes” first… And then they used the idea of a rehearsal as a gimmick to allow all those DaRen to have a pre-event special performance…

So, well, up to this point, she still had not done anything truly useful, and the other party’s storyline song was already ready and out.

Gu Sheng felt guilty for a little while and decided to politely ask Dou Dou Dou Bing if there were any problems with the vocal track she had recorded and sent over… That way, she could demonstrate that she was proactive and not just, uh, exchanging cooking knowledge with Toupai…

“Are you listening, Gu Sheng?!”

“You didn’t hear anything I said just now?!”

“No… Tell me one more time.” Gu Sheng came up with an arbitrary excuse. “I just got a new musical composition, and I was thinking about how I should arrange it.”

“Meh, you know so many instruments anyway. Up to you.” Geng Xiaoxing grumpily repeated what she had said a moment ago and then added, “I listened to the storyline song and thought it was super awesome. Especially Jue Mei’s voice… So beautiful you could cry…”

Gu Sheng felt embarrassingly awkward for a little bit. Although Jue Mei was extremely popular, his voice just was not her type.

Therefore, her response to Geng Xiaoxing’s comment was, um, slightly, ahem… not sharing in the enthusiasm.

However, in regards to the feelings one gets as a voice lover, she completely could demonstrate rapport…

“I guess his voice suits your taste…” Gu Sheng worked with her.

“It’s okay. I understand what you mean. Everyone’s preference in voices is different.” Gu Sheng continued in a very serious tone to work with her. “Anyway, what you feel for Jue Mei is… Like, the instant you hear his voice, your heart is stirred and flutters in response, right?”

“Uh-huh…” Geng Xiaoxing’s voice immediately dropped an octave and, like she was someone’s little wife, repeated, “Heart is stirred and flutters…”

Gu Sheng finally realized from this demonstration what she was like when faced with her own idol’s voice:

“Right. Back on topic, mm-hmm.” Geng Xiaoxing’s voice was tender to the extreme. “Jue Mei said you should have a listen because Toupai thinks the final result is still not great. But I think it’s fine, ah. Definitely the best among anything that I’ve listened to…”

While Geng Xiaoxing was grumbling out a few more sentences, Gu Sheng had already received the song in her QQ inbox.

However, how come she felt this was very weird?

Why did they need her to listen to it? Was it really necessary for this little unknown singer to critique one of Wanmei’s works? …

Gu Sheng agreed to have a listen, hung up the phone, and opened up the audio file.

…… Toupai DaRen, what kind of standards do you have? How could you not be satisfied with this piece?…… From the singing to the spoken lines, from the music arrangement to the post-production to the lyrics – there was nothing about it that was not perfect…

It had been a long time since Gu Sheng had last listened to something of such high quality. And particularly, this also contained lines delivered by Toupai.

She was overcome with excitement as she listened over and over again to it. She must have listened seven or eight times before she took a slight break. So…… for a work of art like this, what shortcomings could it possibly have that needed to be reworked? T T

Geng Xiaoxing, are you sure Jue Mei DaRen was not just pulling your leg?…

She truly felt she could not offer any additional comments. Besides “great,” all she could say was more “great.”

After thinking about it for a little while, she decided to give Geng Xiaoxing a call again to convey that her “skills were inadequate” to provide any useful critique and also to express her deep admiration and love of this storyline song.

Just as she picked up her mobile phone, however, she unexpectedly noticed a WeChat message had come in a few minutes ago.

“Did the poached ‘pearls’ and conch taste good?”

Qiang Qing Ci’s voice was low and even, and hearing it in the afternoon seemed to tint it with the warmth of sunshine.

As Gu Sheng listened to this sentence, she suddenly… felt her heart stir and flutter.

Gu Sheng, you’re not starting to have wild fancies about DaRen, are you? …

Her gaze was fixed blankly on her phone for a long while. Finally, she cleared her throat but still dared not reply. She was thinking — very seriously and carefully considering — whether she really had been influenced by all the gossip and rumors and was unconsciously thinking that… that Toupai was interested in her?!

Things in the 2-D world cannot be taken seriously…

She set her computer on the coffee table beside her, stood up, and took several deep breaths. Throwing aside any fanciful notions for the moment, she started to carry out a normal conversation with Toupai: “Quite tasty. DaRen, have you eaten yet?”

So sad… How could they make Toupai eat take-out? T T

“You’re not at home?” Gu Sheng pretended she did not know and had not seen anything.

Just act as if you can’t see those types of tweets that have romantic suggestions, k?…

Gu Sheng forced herself to continue acting oblivious. “Uh. Haven’t had a chance to check Weibo yet.”

Fortunately, Qiang Qing Ci did not carry on with this subject.

He actually asked her about the recording for “Sword Cry in the Land of the Rivers and Lakes.” Gu Sheng answered very openly that she had sent off her own audio file with her vocal track and was just waiting for Dou Dou Dou Bing, the very important coordinator, to provide any comments or feedback…… Then, she remembered the song that she had just been listening to and decided to offer up her opinion directly to Qiang Qing Ci. “DaRen, I just listened to the storyline song that they sent to me. I thought it was done especially well.”

So, it really was Jue Mei playing a joke on Geng Xiaoxing?

Qiang Qing Ci sent another voice message: “But, if it could have been recorded in a recording studio, the outcome would have been even better.”

His voice was very nonchalant, like he was stating a fact.

Gu Sheng: “Yeah. It’d be even more perfect for sure.”

Qiang Qing Ci casually told her, “But, that song is basically done now.”

“As for ‘Sword Cry in the Land of the Rivers and Lakes’…” His voice in the recording had a slight resonance and a gentle tone to it that was bewitching. “I will set up a time with all of you and reserve a recording studio.”

“That would be so awesome! That way, it’s definitely going to have the best…”

She gaped at her mobile phone, unable to believe what she had just heard.

Did DaRen, he… he just say…he wanted to record in a studio… with me……?