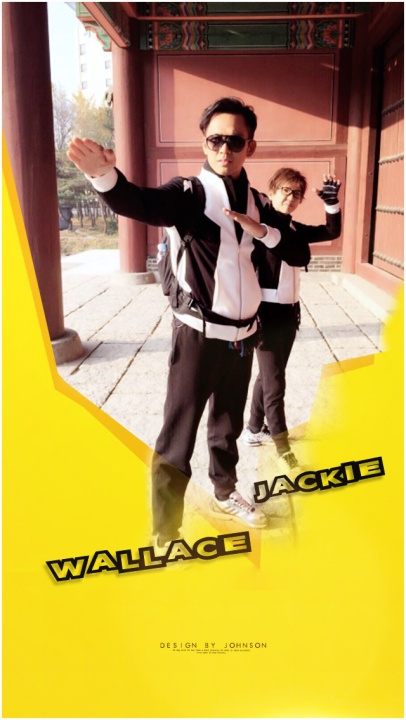 This has been a busy weekend and I am very tired, half dead 😦 Hence my review will be short and lacking in quality because I can’t muster up the energy, not even for my oppa in South Korea. Also, feeling a bit sad that next week will be the final. I can’t spend Saturday morning in bed with WC (on my ipad) anymore, sob sob. I shall miss WC, especially his goofiness to brighten up my day and his determination to energize me.

The next destination was Seoul, South Korea. Haha, WC looked so happy meeting up with the youngsters. Of course, since he was the one who gave them the ‘Save’ card. He laughed so hard and asked the guy if he was surprised that he was the one who won and gave them the card. They kept on saying WC is very nice 😛 Yet they still went and attended the China alliance meeting to discuss tactics against the HK teams 😦

The first task was to write their challenge declaration. The Chung family’s motto is ‘Do your Best’. Since WC won the last race, he got to start off first, 5 mins ahead of the 2nd team. Most of the teams were smart enough to ask the taxi drivers to lead them to Namsangol Hanok Village to look for a grandpa for the next clue card.

They have a choice of doing a Korean traditional dance or find and arrange 30 dishes of Korean cuisine exactly like the sample. Needless to say nobody chose to dance because it is harder and more time consuming. I am sure they were sick of dancing.

Jackie & WC felt the Olympic champion was pretty shrew and smart to suggest to work together with them to each memorize half of the table. WC did not seem to trust him and even tried to commit everything on the table to memory. This was kind of his downfall as well as his impatient in calling the judge too soon since he forgot to put a small plate of white carrot, which he found out later. Hence, all his dishes were cleared away and he had to start over again. Oh, WC was shocked and couldn’t believe it! Seeing that, the Olympic champion asked WC what was missing and knowing that WC didn’t trust him, he promised not to give him the ‘yield’ which will slow down the recipient team, half an hour. Initially, WC was reluctant to help him until he heard his promise. In the end, the couple team and even the youngster team finished the task ahead of WC 😦

Look at these 2 door-busters lol.

However WC managed to arrive 2nd at the seafood market. Luckily the Olympic champion kept his promise and didn’t give WC the yield. He gave it to Ekin’s team who was already very behind 😦 The first task in the market was to deliver 5 octopuses to designated place. Jackie told WC to take more than 5 just in case but he said no. Luckily WC didn’t take more than 5 or else he may have to eat them all, lol. Everyone was shocked when they found out their next task was to eat the octopuses raw, eeeeee…..

WC immediately started to eat them quickly and even earned the praise of the ajumma owner.  The couple also looked at him in awe. Oh, WC is so great and flexible. FYI, he is a vegetarian but for the sake of the competition, he has been eating everything 😦 Ekin’s team gave up on this task and was given an hour penalty. I suspect they are Buddhists so they can’t eat the octopus live.

When eating something horrible, WC has a unique style, lol.

My poor WC had such a hard time struggling to eat and swallow the gruesome octopuses 😦 I saw him vomited out the octopus then ate them back, eeeeeeee so gross !!!! I was eating my lunch when I watched that 😦 After seeing the fire in his eyes, I forgave him lol.

In the end, I think WC ate 3 and Jackie ate 2. She was so nice to tidy up and wipe WC’s hand, mouth and face like a mother most of the time, lol.

Aiya, why that ajumma so strict with my WC, making him shallow everything?

The next task was to skip the rope with 10 people coming in one by one, then in the end the 10 of them needed to skip together 3 times. Jackie suggested to search for a student group and asked the group leader to find 10 people. WC agreed that they should look for youngster. Jackie said WC should have no problem finding people which I agreed lol. WC looked so eager and excited like a kid, lol.

As predicted, WC easily found some Chinese tourist as well as a few Chinese students who can speak Korean. Did you notice that they are all girls except the one holding the rope is the boyfriend of one of the girls as WC needed a strong man for that. I’ve to admit that the youngsters were the smartest to find kids who are best for this task, whi. Ekin’s team were way too nice so wasted a lot of time.

WC was very patient and encouraging with the volunteers. He is such a good and motivated leader. How I wish I was there to participate with him, heehee….

Thanks to the girls’ enthusiasm, WC managed to complete the task first. All of them flock to molest him, lol. He has no choice but to give each of them a hug to show his gratitude. Arrrgh, those lucky girls, I am so jealous, I also want a hug 😛

WC was also eager and excited for the next task until he almost tipped. Unfortunately the taxi which he took didn’t know the way, so he had to change car and arrived third at the university.

After seeing the Miss Korea’s portrait, he has to find her among the 50 girls there and give her the rose. If he gave the rose to the wrong girl, he has to go back and take another rose.

Haha, WC looked so shy while trying to look closely at the girls.

As usual, WC was again too impatient and gave the flower to the wrong girl. If he has taken the time to look properly, it was not hard to find Miss Korea because she looks pretty and has that winner look.

Poor WC, had to run back to get another rose. The Olympic champion even laughed at him ;( WC runs like a kid lol. Because the young girl found Miss Korea, WC was smart enough to narrow down Miss Korea must be the few girls there. He pretended to want to take a picture with them and successfully found Miss Korea. Angel is more blur than WC 😛

Although the youngsters left earlier than WC, he still managed to arrive at the pitt stop ahead of them because he has longer legs so can run faster lol. I guess it is a combination of luck as the youngsters were lost and sheer determination that enabled WC to win this race. Heehee, he was on a winning streak 🙂 Again, there was no prize for this leg, only that WC gets to commence the next race in HK slightly earlier by 5 minutes, lol? Jackie was so funny, saying to the camera, “Papa and mama Chung, see you in HK. Support us ah! We’ll give you all the prizes”. WC can’t help laughing 🙂

Unfortunately Ekin’s team was last so lidge’s favourite team has been eliminated. I feel sorry for them because the teams that lidge supported always lost, she is jinx 😛 I feel it is because they wanted to play a clean game so they lost. Come on, they were the ‘Young and Dangerous’, why turned over a new leaf to be a gentleman? Anyway as Jordan said they’ve enjoyed the process so the result was not important. They didn’t really have the drive to win.

Although WC was still impatient, he has toned down a fair bit as he didn’t say faster. Jackie seemed to like his brother more and more as she was very touched when WC handed her a towel. She lamented that that was the first time WC did that as it had always been her who had taken care of WC since young 😛 WC replied it was because her mouth was too dirty, lol.

WC and Jackie must have a happy and loving family. Their final words were “Papa and mama Chung, see you in HK, Boil your soup, we are coming home! Yes, we are going home to have dinner so cook something good for us.”

After racing around the world, WC is back to HK, his home turf  for the final🙂

Final in Shenzhen, who is the winner? If you are eager to know, leave a comment and I’ll email you personally 😛