Of course, I am saving the best for later so in this post you’ll get to read Feng Teng versus Xiao Nai. Who do you think will win? I am sure you can guess the man in white is Xiao Nai with the game ID Yi Xiao Nai He. Whereas the other man is Feng Teng with the game ID Every Time Wife Lies Dead. So, Big Boss or Da Shen is more handsome? There are pictures of 2 other players in the post so click and see for yourself 😛

Hoju: Sorry, Feng Teng, but in the game, I will take Yi Xiao Nai He.  That drawing is dreamy…

For those waiting for the drama filming of Wei Wei & Xiao Nai, the latest buzz is that it’ll be postponed because Gu Man is revising the script. I guess she has heard feedback of how cheesy and corny her My Sunshine’s script is 😛 No actor or actress has been confirmed. On the other hand, the actress for the movie version has kind of been confirmed but has not been announced yet. Hence, all you can do is wait patiently.

When Feng Teng walks into the room, Shan Shan’s bright eyes are fixated on the computer.

“Playing online games again?” Feng Teng takes off his coat and walks over.

“Come quickly, come quickly, too handsome!!” Shan Shan does not even turn her head but fixes her attention on the computer. When he gets close, she pulls him over and points at the elegant and suave figure on the screen. “Look! Wei Wei’s husband is pk-ing (player kill which is used most often for online games. It is also colloquially used in China and Taiwan as a verb form of the word versus) with someone. His actions are too graceful ah!“

Feng Teng takes one look, then silently shifts his gaze from the computer screen to his wife‘s face ……

Shan Shan crouches at the side of the table. Her chin is resting on top of the table and she is looking painfully at her laptop, which has now fallen into Boss’s hands.

Furthermore, he has immediately taken on the difficult challenge! He would actually seek out Xiao Nai to PK in his first time playing the game?

He just figured out how to walk and what the good moves are!

As expected …… he dies very fast.

Shan Shan cannot bear to look and turns her head.

Feng Teng glances at her and gives a snort of disgust. He looks attentively at the skill bar to familiarize himself with the technical abilities again. Then he points at Yi Xiao Nai He to PK for the second time.

…… This time, he plays for three more minutes.

He actually perseveres even a little longer!

He has actually played for so long and still has not lost yet?!

Shan Shan nervously fixes her eyes on the screen. After a while, she widens her eyes in shock and shouts excitedly: “Ah ah ah, he does not have any more blue (in reference to the blue bar that indicates health)! You are going to win!!!”

“I don’t have any left either.”

After Feng Teng calmly finishes saying this, the two graceful figures who had been weaving around the screen swiftly separate. Each sits off to the side in meditation to recover their strength.

Do you know what kind of magical personage Yi Xiao Nai He is ah? Boss is able to so quickly become evenly matched with him! Shan Shan feels Boss is simply too awesome. It just so happens that she is squatting next to Feng Teng’s legs, so she easily hugs his thigh and adoringly says: “You’re very powerful!“

Although the wife’s starry eyes have finally returned to look at him, losing three straight sets and then barely getting a draw is simply a disgrace for someone like Feng Teng, who is used to being a consistent winner in life.

Thus he …… calmly types these words —— “My wife was playing just now.”

On the other side, Xiao Nai also calmly types his reply: “My son was playing just now.”

Wei Wei is enlightened. No wonder they can be business partners. Both are so shameless, don’t you think so?!

Wei Wei: “Is what you’ve done okay? …… Isn’t President Feng the biggest investor in our company ……”

Xiao Nai calmly says: “Don’t worry, the funds Feng Teng invested over here have all been used up already.”

On the other side.
Shan Shan complains: “You’ve lost. Who asked you to not want children earlier, or else we could also say it is our child who is playing.”

Feng Teng’s look shows he is deep in thought and he replies without thinking: “Yes.”

Feng Teng: “I suddenly remembered, it has been a long time since I have shown concern about the project with Zhi Yi Technologies, so I plan to find some time to look into it.”

Shan Shan: You are thinking of how to find faults and to use your business position to avenge personal grudges……

President Feng, who has always only ever been concerned about business operations, has suddenly also started to show concern about the little details of the online games under his company’s banner. How did that come about? It is so much so that he would even specify, a certain occupation in the game has become too strong so it has to be weakened a bit to achieve equilibrium ……

The general manager quickly gathers his subordinates to convene a departmental meeting.

“Does anyone feel that the occupation of a player of a stringed instrument (zither player) is too strong and needs to be weakened?”

The subordinates look at each other hesitantly. “You are right, this occupation was very strong before. However after a few adjustments, its skill has been been weakened by a lot, to the point that now, complaints and resentment have flared up. If we weaken it again, I am afraid that it will pretty much become useless.”

The general manager is feeling very distressed: “This is an instruction from President Feng. President Feng has never gotten involved in the specific details of online games, so why all of a sudden ……”

Suddenly one of the subordinates says: “If I remember correctly, President Xiao of Zhi Yi Technologies uses a zither player when he plays …… Could it be that President Feng has PK-ed with him?”

—— The hidden truth has been exposed by someone!

The subordinates glance at each other uncertainly, but the more they think about it, the more convinced that it is possible. Firstly,  President Feng actually knows about these characters —— then he certainly has played the game before. If he has played before, the possibility that he played together with President Xiao is very high —— and then he must have lost.

The general manager decisively announces: “After walking out of this meeting room, everyone should forget about this matter!”

——  This news of our Boss losing to a business partner absolutely cannot be made known to any outsiders!

One by one, the subordinates nod their heads, then ask: “Then, do we still need to weaken the musician?”

General manager: “No need, even if he is weakened, President Feng still cannot win, so don’t waste the effort.”

Subordinates: (⊙o⊙) …… General manager, is it okay for you to be so blunt?

General manager: “…… After walking out of this meeting room, everyone should also forget what I just said.”

A few days later, the general manager of Feng Teng Technologies stumbles back to his own department after a group meeting. He tearfully confides to a close surbordinate: “Xiao Han ah, I may not continue to work for long.”

Xiao Han, in alarm: “What happened in the meeting just now?”

General manager: “Not during the meeting but after the meeting. President Feng asked me to stay back on my own, then asked me again about the matter of weakening the zither player occupation.”

General manager: “I said, ‘It is useless to weaken it ah. President Feng, how about I write you a hack (‘kai gua’ – code or software which allows a player to do things that normally would not be possible in the game, for example, getting extra money, unlimited health, changing time; basically a way to cheat).'”

How can you express your true opinions? General manager, since you were transferred to the technology company, you’ve hung around too long with the computer nerds (zhainan – male addicted to computers, computer games, adult cartoons etc. Derived from Japanese otaku). You’ve forgotten your old skills of craftiness and cunning!

General manager sorrowfully says: “Xiao Han, do you think I will still have a job for long?”

“……” Xiao Han says firmly: “General manager, I will definitely follow you if you leave!”

On the other side, in B city.
Yu Gong strolls into Xiao Nai’s office. “What’s going on, what’s going on? Why all of a sudden Feng Teng Technologies is starting to nitpick and has so many suggestions on the details?

Xiao Nai moves his gaze away from the computer but after a few seconds moves it back again. “Nothing. Their President Feng and I have PK’d a lot in the game lately.”

Yu Gong: “…… And you chopped up our investor into seventeen or eighteen pieces?”

Xiao Nai answers understatedly: “Not that bad. I often let him draw. However, he asked me after a game a few days ago, how were his PK skills.”

Yu Gong: “…… How did you answer? Why am I suddenly feeling a little despair? Did you say anything that is irreversible?”

Yu Gong feels increasingly desperate: “What exactly did you say?”

“I said, ‘You should be about the same level as your wife.'”

Yu Gong supports himself by holding onto the wall and walks away.

Beside the bookmarks, you also get this poster when you buy the reprint novel. As you can see, Yi Xiao Nai He leads the pack with Big Boss at the back. Can you spot Shan Shan lying dead on the ground lol? 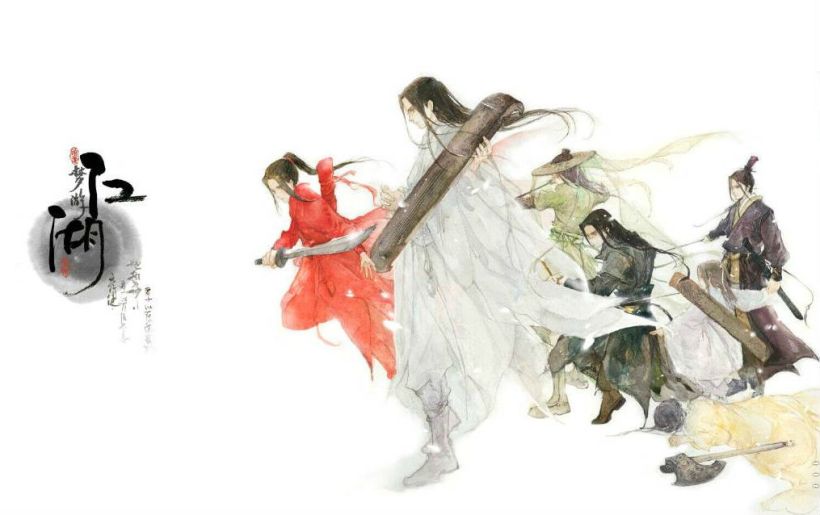