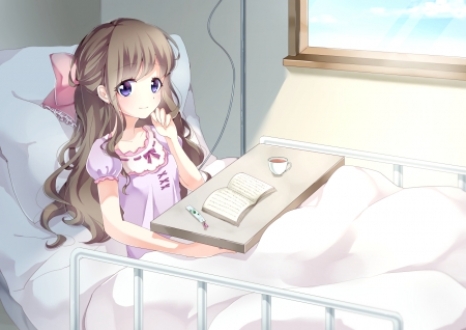 You can see the gradual improvement of the relationship between Xi Guang and Lin Yu Sen in this chapter. Gu Man loves to play online games so it is reflected in most of her novels 😛

I felt all kinds of weird.

Dr. Lin …… our vice president was leaning casually on the window sill and looking at the X-ray in his hand ……

They were having a serious discussing of the surgical plan ……

But why were they doing that in my room?

I have never seen Lin Yu Sen like this.

He fixed his gaze on the X-ray and focused on it. He appeared contemplative, as if apart from the medical case in front of him, there was no other important thing.

Regardless of whether the self-confidence he exuded when making a statement or the expression in his eyes when having a discussion, everything also made one felt so strange. He even started to dress casually, often only a sweater and nothing formal like in the company ……

He seemed to like to be a doctor very much.

They were fully engrossed in their discussion. An idle person like me was looking at them, and went so far as to forget to move my gaze. Lin Yu Sen was saying something about what direction to take, but all of a sudden he paused and looked at me.

Together with those few doctors, all of them also looked at me.

I felt embarrassed and gave them an awkward smile. Then I silently turned my head.

After that, I heard Dr. Fang snickered.

Lin Yu Sen stood up and straightened his body, “We are almost done. How about we’ve a meal together?”

“Okay good.” The doctors all agreed.

Lin Yu Sen put away the information and looked at Dr. Fang.

Dr. Fang stretched lazily, “Aiyo, recently I received a lot of assignments.” He smiled, stood up and walked to my bedside, “Let our patient also go and eat together with us!”

I could not help but look at Lin Yu Sen. Our gaze met, then he lowered his eyes to look at his watch.

What was it all about when the patient eating together with the doctors?

“…… Yes ah. Auntie Chen said those meals were delivered for Vice President Lin because he has something to do here. She brought another set for me without much extra effort.”

“Do you think this is logical?”

Yin Jie was  stroking her chin, while saying: “Xi Guang ah, you really don’t think that Vice President Lin may be interested in you?”

If, it is really like what she said, then Lin Yu Sen’s emotion is too strange, right? How could he change from disliking me to liking me in such a short time span?

“It seems like he was here to discuss a very difficult surgery with the doctors …… In addition, he may feel that he should also bear a little of the blame that resulted in my fall? Moreover he was not the one delivering the meals. It was auntie Chen who has been delivering meals to me daily. At the same time, he will come and visit me in passing, and will also leave very quickly. If he did not leave, then …… ”

Yin Jie was looking at me with a gleam in her eyes, appearing eager to dig out some gossips. But she was destined to be disappointed.

“Then it was to discuss some medical issues with a group of doctors here or gossip about the medical fraternity!”

“In that case, can you understand?”

“…… Which is why I asked you to bring the video game for me!”

“The vice president really spent his annual leave in an extraordinary way.” Yin Jie heaved a sigh, “Is he a workaholic? Granted, that he usually works a lot of overtime in the office, but to still come to the hospital when he is on leave.”

I strongly agreed and at the same time spread some gossips: “Dr. Fang said that he has always been very scary. Simply inhuman when he was studying in medical school, and even worse when he started to work in the hospital. After completing a more than ten hours surgery, he can still function like a normal person ……”

As I mentioned more and more, Yin Jie became exhilarated while listening to them, “Your doctor in charge told  you a lot of gossips on Vice President Lin.”

After thinking carefully, he did indeed tell me a lot. When we were having our meals, usually other people will normally talk about their specialised fields, but he will pull me aside and chat. My conclusion: “He seems a little gossipy.”

“I can’t imagine what vice president looked like when he was a doctor ……” Yin Jie thought for a long time before giving up, “Xi Guang, then your relationship with the vice president should have changed for the better, right? Xi Guang, this is a rare opportunity, so you must not continue to be so stubborn.”

“Oh, I feel that his attitude towards you is quite different from before.”

Regarding the change in Lin Yu Sen’s attitude, suddenly I recalled what he had said that morning and cannot help asking Yin Jie, “Yin Jie, do I look very scary when I cry?”

“……Or do I look particularly …… pitiful?” When I was saying this, I also trembled a bit.

“……” Yin Jie obviously cannot take it any longer, “I have not seen you cry before. Come, let me pinch you to test it out!”

Yin Jie left the video game behind and left.

With the video game, my days in the hospital was finally not so boring as I played joyously very day. Once, when Lin Yu Sen came, I was at the critical moment in the game to level up. Thus I greeted him with a few words and continued to be engrossed in the game.

When I stopped playing, he had already gone. I instantly felt rather upset. I have been eating his food every day. However, when he came to visit me, I was actually engrossed in the video game, which was so rude. I tossed and turned restlessly on the bed for the greater part of the day and in the end I could not help but send him a message to apologize.

“I’m sorry. It just so happened that I was too engrossed in trying to advance to the next level in my video game.”

After sending it out, suddenly I realized that this also seemed impolite. Fortunately, he replied promptly and did not seem to take offense.

“You should not do such intense mental activity now.”

He sent another message a while later. “Have you advanced to the next level?”

I quickly replied: “No.”

If I knew beforehand that sending a message can cause such consequences, I definitely will not send  —— the next morning, Lin Yu Sen actually brought a pile of work for me……

“Vice President …… In fact, I am not a workaholic like you. I don’t want to work overtime at all ……”

“Playing video game is too mentally exhausting, so you need to take a short break by working.”

I silently watched him put a pile of files on my lap.

He comfortably took off his coat and threw it on the sofa, then said: “Where is your video game? Since you failed to advance to the next level yesterday, can I help you?”

I was stumped for words because I felt that this kind of conversation was unlikely to happen between us. While our relationship has eased a lot in the past few days, but it seemed not as relaxed and casual to this point.

He also seemed frozen as if suddenly he realized what he had just said and stopped smiling. I did not know how but subconsciously, I hastily took out the video game from under the blanket and handed it to him.

Then I stared blankly at him.

His gaze moved slowly from my face to our hands and slowly grasped the video game in his hands.

In the quiet room.

Supported by a small table, I made a half-hearted attempt to write the annual summary report. Whereas Lin Yu Sen was sitting on the sofa and playing seriously with the video game.

I felt that he was rather unskilled.

Later, I discovered that it seemed like his left hand totally cannot keep up with the speed of the right hand. He probably also realized this because he stopped playing and silently looked at his left hand when he failed to advance to the next level once again.

I did not know why but suddenly I did not want to see this anymore. Hence I turned my head and concentrated on writing the report.

Before long, he returned the video game to me and left. I looked at his performance …… a little dismal.

All of a sudden, I have lost interest in playing video game.

The afternoon sunshine was just right, so I took a nap. After I woke up, I felt bored so I slipped out of the room. I wandered one round in the lackluster small garden in the hospital.  When I was about to go back, the moment I turned around, I saw Lin Yu Sen.

He was sitting on a chair in the garden and playing video game with his head down. To my surprise, there was a child next to him, who was guiding him.

No matter how I looked at it, I also felt this scenario was out of place.

Moreover the video game in his hand was not mine. Could it be that he had gone and bought one?

Out of curiosity, I approached a little closer.

Under a shady tree, the childish voice of the child can be faintly heard.

“Uncle, other doctors said you are a very very awesome doctor. In that case, will you be able to perform brain surgery on my dad?”

“Oh, but you are more handsome ah!”

I can feel Lin Yu Sen’s speechlessness and unable to contain a smile. However, before I cracked a smile, I heard Lin Yu Sen, said: “Uncle can’t even play video game well.”