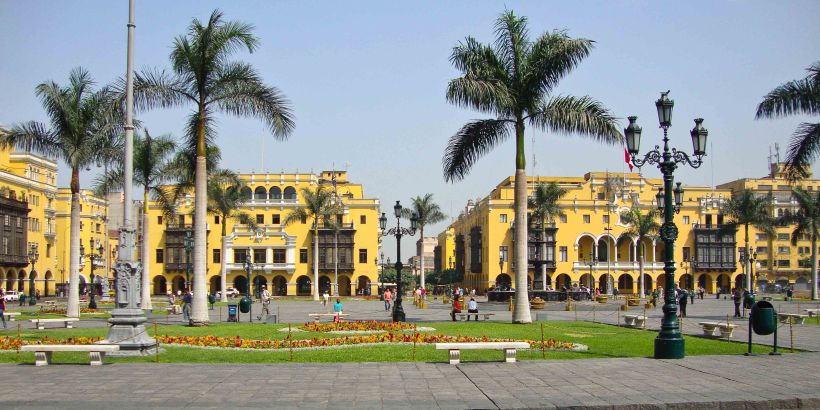 Anybody missed Mo Ting and An Ning? This is a strange epilogue. The author could have written a romantic and funny honeymoon but I don’t know why she wrote such a weird one like an advertisement for Lima tourism. Anyway I still translated it for completeness sake. Is there any reader from Lima? The next epilogue will be more interesting on Xu Mo Ting’s confession love letter which will be posted in July, after my long vacation 🙂

The light gray misty rain enveloped the entire city of Lima early in the morning. It accompanied the fluttering sound of the cathedral bell. Together with the deep purple sky, it covered this city with a gorgeous and elegant outer clothing.

As the world famous ‘No rain city’, rain fell unexpectedly in Lima today. Although it was only a drizzle, it was still a strange occurrence.

He feared several of his neighbors’ houses built with cardboard will suffer tonight. While thinking about that, Gouvinho tightened the cloak around his body. Looking at the empty military public square, he heaved a sigh softly because he was afraid that business will be less today.

Praying in a low voice and making the sign of the cross, he has no choice but to wait. A woman hurriedly ran across the public square caught his attention.

Holding onto a glimmer of hope, Gouvinho exerted himself to tout in a loud voice: “Fresh lamb meat, as well as hot deep-fried fish!”

The unexpected sound of his voice obviously startled her. An Ning halted her footsteps and looked over hesitantly.

Her pitch-black hair and eyes clearly indicated to Gouvinho that she is not a Westerner. He was a bit anxious because he can only speak Spanish. Will she be able to understand?

Nowadays there are more Asian tourists travelling to Peru, mainly from China, Japan and South Korea. He can speak a little Mandarin, but he was uncertain whether she was from China. Never mind, just take a chance.

Thus Gouvinho used some awkward Mandarin pronunciation to call out to her: “Hello!”

She froze for a moment. Then she tilted her head slightly and gave a shallow smile. He watched her walking to his stall and was trying to use unfluent Spanish to smilingly say to him, “Hello”. Suddenly Gouvinho felt the gloomy mood of the past few days became a lot more relaxed instantly because of that bright smile.

He looked eagerly attentive and expectedly at her, “Want anything?”

She seemed embarrassed —— could see that she did not intend to buy anything. She only hesitated for a moment, smiled and nodded, “Three servings of fish and three servings of lamb meat, thank you.”

Smiling gratefully at her, Gouvinho deftly began to deep fry the fish, while chatting with her, “Normally, it never rains in Lima. I wonder why rain fell unexpectedly today. No rain gear is available for sale here, so causing you some inconvenience?”

Lightly brushed away the wet hairs on her forehead, this woman’s complexion was fairer than the Asians who he normally encountered. The dim street light fell on her face, casting a light purple shadow. She raised her head and looked up at the dark sky. Lowering back her head, she still has that gentle smile, “It doesn’t matter.”

Truly a good person …… Gouvinho sighed with sorrow and looked at her hands holding so many things. What was her loved one thinking, so heartless to let her come out to do shopping in this kind of weather?

An Ning raised her head and looked up at the sky again. Under the light, there was a trace of anxiety in her eyes —— it was getting late, if she was further delayed, she was afraid someone will start to worry. Then she would be scolded and will be in a very pitiful state at night ……

Upholding the principle that one must be friendly and courteous when interacting with people, at this moment An Ning was unable to say because she was in a hurry, she did not want the stuff and wanted to leave or something to that effect.

Hence she can only stand quietly in front of the stall and listen to the person opposite chatting incessantly about the weather, with a gentle smile. She tried to understand a few words so that she can politely reply with a few words.

A sea of mist began to float in the public square, as if life-like, gradually enshrouding it to become a dark blue world.

Noting her gaze, the stall owner smiled and explained to her, “This is La Garua (winter fog) formed by heavy mist which can only be seen here.”

“Is it? Very beautiful ……” An Ning exclaimed in admiration and looked at that fairyland-like museum half hidden by the thick fog, uh …… if someone knew that he missed such a beautiful scenery, will he feel it was a pity?  She will tell him after she got back …… imaging Xu Mo Ting’s expression, she could not help chuckling.

The vendor looked at her joyful and smiling face, abruptly said, “It is so good to be young ah, carefree and without worries.”

Unfortunately Li An Ning completely understood these few words, the smile on her face instantly froze. A burst of cold wind swept up the tree leaves and blew over, she could not help shivering.

Before she could tell him about the beautiful scenery, Xu Mo Ting will …… well …… anger or arousal, and he would absolutely choose to first vent the latter. Thinking about this, An Ning sighed deeply. Sneaking out to buy things really have to pick the right time? Caught in the rain and also stopped over here ……

“Sorry to have kept you waiting.” The vendor quickly used the oil paper to wrap the deep-fried fish and lamb meat, then handed over, “10 Sol.” (local currency in Peru meaning sun)

Taking the money, he looked worriedly at the things in her hands, “Can you take them?”

She smiled at him reassuringly, An Ning put the oil paper bag into another paper bag. Then she carried the big bag full of things in her arms, “Thank you, goodbye.” She turned and ran quickly toward the hotel, her slim figure gradually disappeared from the cold, empty and vast streetscape.

As soon as she opened the hotel room, An Ning put the things in her hands on the coffee table. She took three deep breaths, summoned up the courage, gently pushed open the bedroom door and called out in a low voice: “Xu Mo Ting?”

There was no response, so she mustered up the courage to enter the bedroom —— he has not woken up yet? An Ning almost cried tears of joy.

Xu Mo Ting was lying on the bed and looking extremely relaxed. Only half of his body was covered with a quilt and his slender fingers dangled over the side of the bed. The dim light from outside the window shone through the opening between the two curtain flaps, making the person on the bed appearing a bit hazy.

An Ning walked to the bedside and had wanted to cover him up, but instead she gulped down saliva while looking at his exposed fair collarbone …… when she made the prompt decision to return to the living room and was about to sneak away, suddenly a strong hand grabbed her hand.

She turned around in fright and saw that he was not fully awake as his eyes opened only slightly. He slowly turned his head to look at her.

“Where have you been?”

Being pulled forcefully, An Ning staggered and fell on top of Xu Mo Ting. Before she could react, he lifted his hand to hold back her body and seal her lips.

Feeling his tongue inside her mouth, slowly moving over her teeth and then faintly, almost imperceptibly sucking on her. Her legs immediately went wobbly and her breathing getting heavier and hotter, the palm began to slip down ……

An Ning turned pale with fright, used some strength to pull them further apart and could not help begging for mercy: “I bought breakfast.”

An Ning felt that her waist had gone weak again.

Xu Mo Ting looked at her, seemingly not fully awake yet. Finally he smiled and kissed her lips, but not intense, just gently caressing: “Good morning Mrs. Xu.”

What followed was one hour of those bedroom activities that are not to be spoken of to anyone else.

Lima: The capital of Peru is known as a ‘No rain city’. It is located at the western coastal region of Peru, at the edge of the Pacific Ocean. Its city center is 154 meters above sea level and the population is about 7.49 million. Every year, from November to April of the next year, the minimum temperature is 16 degrees and the maximum temperature is 28 degrees. The hottest month is February, with an average temperature of 23 degrees.