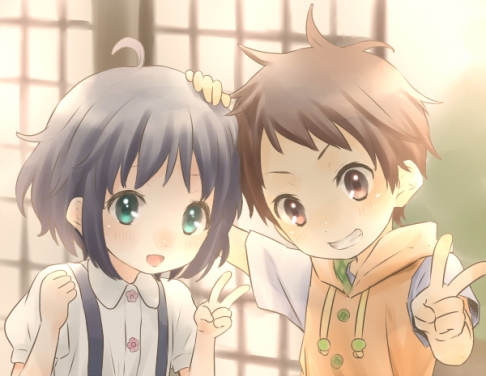 Passing on a hello from the author, Mo Bao Fei Bao, who asked me to send her regards to all the readers on this blog of the translated versions of her novel. ❤

A short, cute conclusion to the main story. Only the epilogue to follow!

Their story really did begin long ago…

Final Chapter — The Very First Time I Saw You (2)

When the birthday event came to a close, Chu Jian’s mom, without any prompting, urged everyone to leave first while Chu Jian went to find Jian Bianlin. Xiao Yu led Chu Jian backstage, where many staff were busily, yet also relaxedly, doing the wrap-up work. Someone was even yelling loudly, asking where they should all go for the post-event celebration.

The door to the dressing room was pushed open, so Chu Jian slipped herself inside.

Jian Bianlin had already removed his make-up and outfit. Wearing a down jacket, with his back to the mirror of the dressing table, he was taking sip after sip of warm water. When he saw Chu Jian step inside, he stopped.

Chu Jian walked over to him, a thermal jar in her hands. “I brought some fried yuanxiao[1] [glutinous rice balls] for you.” 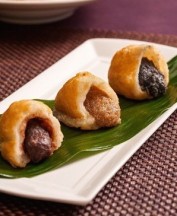 Oh, right. Today was the Lantern Festival. He had forgotten.

“I made them myself. They’re fried,” Chu Jian told him quietly. Picking one up and then stabbing it with a chopstick, she stuffed it into his mouth. “Say that it tastes good.”

“……” It was too big. He chewed for a dozen or so seconds before he was able to swallow the entire thing. “It tastes good.”

“What flavour was it?”

She stuffed another one into his mouth.

She wanted to stuff another one but he grabbed her hand. “Let me have a drink of water… to take a break.”

Chu Jian detected that his fingers were like ice. She reckoned that he had been chilled when he was dancing or doing the interactive portion of the program or something along those lines, so setting down the thermal jar and chopsticks, she huffed a couple of warm breaths onto her palms, then wrapped his hands in her own.

When her palms first contacted the backs of his hands, he instinctively tried to pull away. “They’re too cold. They’ll make you cold.”

Chu Jian did not speak as she closed her hands around his and, while she was at it, rolled her eyes at him. “Melodramatic.”

“I talked to Xu Jing on the phone earlier.”

Out of habit, Jian Bianlin creased his brows, not uttering anything.

“I told him not to contact me anymore. You’re too petty and will get mad.” Chu Jian liked seeing him jealous. Observing his eyes and expression carefully, she asked in a low voice, “He said, during that time when your dad had that work injury, he saw you at the school. Was it that day when you made me so mad I ran away?”

“Are you going to eat any more?” Chu Jian nudged the thermal jar forward.

Jian Bianlin was actually thinking, she must not have eaten dinner yet, either, and if he stayed here and ate too many fried yuanxiao, it would end up delaying when he would be able to take her to have dinner.

Jian Bianlin: “How about if I eat one, you say who I am? Address me.”

He brought his lips close and brushed them against her soft ones… His lips were moist and supple. His tongue stroked inside her mouth for a while, but then, after thinking briefly, he decided that he still wanted to hear her address him. So, he pulled the thermal jar to himself and really did begin to eat again.

Chu Jian: “… You’ve honestly forgotten what day it is today?”

How could he forget? Anything that concerned her, he would never forget.

Today was the anniversary of their first meeting.

The very first time he met her was also on the day of the Lantern Festival.

More than twenty years ago, his dad had brought him to knock on the doors of all the neighbours to introduce themselves. In not-very-good Mandarin, his dad explained that they had just moved in and were taking advantage of the Lantern Festival to wish all the neighbours a happy holiday, as, after all, “a far-away relative is not as good as a near neighbor”…

The first door they had knocked on was Chu Jian’s home, but unfortunately, Chu Jian’s mom had been frying yuanxiao at the time. The sound of the oil and frying had been too loud, so no one had heard the knocking. Afterward, they had circled back again to finish up at Chu Jian’s door.

Jian Bianlin still remembered, when the door opened, Chu Jian’s mom had looked particularly beautiful. Smiling cheerfully, she listened to all that they had to say, especially when Jian Bianlin’s dad tactfully explained that there was no woman in their household and hence he, as a single dad, could only, by himself, bring the child along with him to this place. Immediately, Chu Jian’s mom warmly pulled the father and son pair inside. She brought Jian Bianlin over to sit beside Chu Jian and then called Chu Jian’s dad out from the kitchen, where he had been doing some chores. The three adults exchanged pleasantries and chatted casually. Chu Jian’s mom even deliberately slowed her speech down slightly to accommodate Jian Bianlin’s dad’s not-so-good Mandarin skills.

He told her in Cantonese, “Gim Binlam [Cantonese pronunciation of Jian Bianlin].”

Her eyes were fixed on that plate of fried yuanxiao. Just that afternoon, Mommy had promised her that if Chu Jian could find and eat one of the three yuanxiao that had red bean paste filling, Mommy would make a new dress for Chu Jian’s dolly.

Noiselessly, Chu Jian stabbed open one with her chopsticks. Nope. She tossed it into the bowl in front of Jian Bianlin. She stabbed another one open. Nope, still not. Tossed it over there again.

Pretending he wanted to eat them.

So, before long, half the yuanxiao on the plate were gone, all of them in Jian Bianlin’s bowl.

“Thank you for your help.” Chu Jian had finally found one with red bean paste filling and was smiling so very delightedly.

Since he was young, Jian Bianlin’s practice was that he should not leave leftover food. Silently, he buried his head and ate away, grumbling in his mind, This little girl is so annoying. I don’t ever want to see her again…

This was the very beginning, but it was not the ending.

Do you still remember the dreams of our youth? They are like a flower that shall never wither[2].

[1]元宵. Yuanxiao are a “dumpling,” usually sweet, rolled (not wrapped) into a ball formed from glutinous rice flour. A filling is first formed into a sphere and then dropped into glutinous rice flour where it is shaken and rocked back and forth until it forms a ball covered in the  flour. Fillings can include sesame, red bean paste, almond, etc. and are a traditional food of  the Lantern Festival (which is the fifteenth day of the new lunar year). Yuanxiao can be eaten fried or not fried.

[2] This line is taken from the song 《爱的代价》The Price of Love, with music and lyrics composed by 李宗盛 Jonathan Lee. It was originally sung by 张艾嘉 Sylvia Chang.

Actually, instead of my additional comments, I thought, to give you a little glimpse into the person that Mo Bao Fei Bao is, I would translate for you what she wrote when this last chapter was released and the online version of the novel came to a conclusion. (The epilogue is only in the printed version of the novel.)

While the updates for this novel were being released, a reader left a comment that really touched me. She told me to work hard in my work, to be a good author and to also be a good screenwriter, and she hoped that I would make her proud. At the time, I was really touched, but I did not know how to respond to her.

Now, with the conclusion of this story, I’m going to take advantage of this topic to tell you the background and reason behind this story. (The story has nothing to do with me personally.)

Last year, one of my dearest friends endured the greatest betrayal and setback of her life, to the point that she nearly lost everything she had. She was my best friend in my childhood. And so, I “brought her home” with me. I wanted to win and conquer a brand new “kingdom” for her, to let her know that there is someone in this world who still loves her. I thought, one day, I, with my 158 cm build would hug her, with her 172 cm build, and say to her, “This is the kingdom that Zhen [the imperial “I,” what emperors used as a self-address] conquered for you. Muahahaha.” (How come everyone whom I’m close to is so darn tall?)

So, in ways and places that you all cannot see, I have been very well and working very hard over these last couple of years. And if I’m not around, I am still very well. Please rest assured.

I’ll stop here. The story that I wanted to tell has now come to an end.

Lastly , I’ve included the lyrics for 《爱的代价》The Price of Love, the song from which the concluding sentence was taken, if you are interested.

还记得年少时的梦吗?
Do you still remember the dreams of our youth?
像朵永远不凋零的花
They are like a flower that shall never wither.
陪我经过那风吹雨打
They have been with me as the wind and rain battered down,
看世事无常 看沧桑变化
And have witnessed with me the vicissitudes and shifting scenes of life.

那些为爱所付出的代价
The prices that have been paid for love
是永远都难忘的啊
Will never be forgotten.
所有真心的 痴心的话
All those words spoken of a sincere heart, a besotted heart
永在我心中虽然已没有他
Forever remain in my heart, even though he is no longer in my life.

走吧 走吧 人总要学著自己长大
Move on, move on. People will always eventually need to learn to grow up.
走吧 走吧 人生难免经历苦痛挣扎
Move on, move on. Experiencing pain and struggles is an inevitable part of life.
走吧 走吧 为自己的心找一个家
Move on, move on. Find a home for your own heart.
也曾伤心流泪 也曾黯然心碎
I, too, once shed tears of sorrow; I, too, was once grieved and brokenhearted.
这是爱的代价
This is the price of love.

只是我心中不再有火花
But there no longer is a spark in my heart.
让往事都随风去吧
Let the past go with the wind.
所有真心的 痴心的话
All those words spoken of a sincere heart, a besotted heart
永在我心中虽然已没有他
Forever remain in my heart, even though he is here no longer.