A teacher who brings you a big breakfast, so sweet 🙂 Why I never have this kind of teacher 😦 ?

When Yu Tu arrived home, Zhai Liang was playing games with Qiao Jing Jing. He took a glance at him while still busy playing games: “He’s back, don’t worry.”

Qiao Jing Jing’s voice came from the game. “Why did it take so long?”

Yu Tu: “The subway has stopped service, so I needed to transfer.”

Qiao Jing Jing was distracted for a moment, which resulted in Wang Zhaojun accidentally taking a step toward the tower. Immediately, she was hit by the tower. The other team’s jungler, Li Bai (acclaimed Chinese poet during the Tang dynasty – warrior/assassin) came out of nowhere and hit her with an ultimate ability.

Wang Zhaojun was so frightened, she covered her head with her arms and scampered away. “Aaaaargh, save me.” 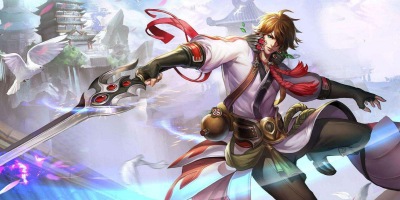 Yu Tu couldn’t help but smiled when he recalled how Zhai Liang ridiculed some celebrities not long ago. He wondered what his reaction would be if one day he found out that this Cotton was presently one of the most popular female artistes.

Zhai Liang was playing games with his head lowered. He casually asked, “Yu Tu, is your air purifier repaired?”

Yu Tu pondered for a moment before answering, “You ask Qiao… Cotton. Use her reply as the standard.”

There is a mmp (ma mai pi is a crude swear word in Chinese akin to son of a bitch in English) in Zhai Liang’s thought, which he did not know whether it was appropriate to speak. What kind of an answer was that?

“Not going to play a match?”

“I have something to do.”

Zhai Liang felt that after Yu Tu went to Cotton’s house, something seemed different, but he could not pinpoint what was different. After thinking for a long time, he turned to the mobile phone and asked Qiao Jing Jing.

“Cotton, is your air purifier repaired?”

After Zhai Liang finished playing a match, he eagerly went to look for Yu Tu. He saw that Yu Tu’s computer was on and Yu Tu was looking attentively at the screen. He was rather surprised because Yu Tu had been very dispirited lately and had not touched the computer at all. What was going on today? Could it be he had made a decision?

He walked over and took a look. The picture on the computer screen was a King of Glory competition.

“You are watching a professional tournament?”

Yu Tu’s answer came in a very indifferent tone. “Probably because I just suddenly got interested.”

“…..” Suddenly Zhai Liang remembered an important question. “By the way, is Cotton pretty?”

This time, Yu Tu contemplated for a while, then answered him: “She can be seen everywhere on the street.”

Zhai Liang was a little disappointed, but he still righteously criticized Yu Tu: “Isn’t your mouth a bit mean? How can you say that of a girl?”

Much later, when Zhai Liang finally saw the true face of “Cotton”…… he was so impressed  he wanted to kill Yu Tu…. This face… could indeed be seen on the street everywhere, couldn’t it?

Yu Tu continuously watched professional competitions until two o’clock. At two o’clock, Qiao Jing Jing, who had been asleep, suddenly woke up. Then, she couldn’t get back to sleep. Staying in bed for a while, she pulled out her mobile phone and sent a message to Xiao Zhu in WeChat (mobile text and voice messaging service developed by Tencent).

“Get the driver to pick Yu Tu up tomorrow.”

Of course, Xiao Zhu was not online at this time. After a while, Qiao Jing Jing recalled the message.

It seemed a little inappropriate to do this…

Oh, that’s right, she seemed to have forgotten to add Yu Tu in WeChat …

Qiao Jing Jing groggily thought for a while, then fell asleep again. She woke up at the healthy hour of seven o’clock. Xiao Zhu had already been shouting for her in WeChat for a long time.

“Jing Jing, what message did you recall?”

“You’ve stomach pain in the middle of the night?”

Qiao Jing Jing replied her: “I asked you to bring breakfast for two!”

“Wait!” The moment she sent it, she changed her mind again. “You don’t have to come over in the morning.”

Then she opened QQ and sent a message to Yu Tu.

After a few minutes, Yu Tu replied, “Okay, what should I bring?”

Qiao Jing Jing’s universal answer: “Whatever. Oh, by the way, the password for the elevator to my house is xxxx. Can you come up directly? Xiao Zhu is not here.”

Qiao Jing Jing opened the door for Yu Tu, who was standing at the doorway. He hesitated for a moment before stepping in and handing the bag to her. “I randomly bought a bit.”

See, asking him to bring things can create a topic of conversation. But…

“… can we eat so much?” Qiao Jing Jing held that bag full of food and stared blankly at him.

And it was only a single-person portion? What kind of misconceptions do you have about the stomachs of the people in our industry?

The dumbfounded expression in her eyes caused Yu Tu to have no choice but to explain himself. “I don’t know what you want to eat, so I bought a bit of everything.”

“Oh ~~ Then we can have some of it for lunch, too. I’ll ask Xiao Zhu to deliver less food at noon. Oh, by the way…” Qiao Jing Jing just thought of something. “It’s not very convenient for me to go out, so I can only get Xiao Zhu to deliver our lunch and dinner here in the future. Is that okay with you?”

“Dinner?” Yu Tu paused. “So what time will I be getting off from work?”

Qiao Jing Jing had not thought about this question. Her eyes flickered and she deliberately said, “9 o’clock at night?”

“As long as your hands are not sore.”

Qiao Jing Jing quickly finished eating her breakfast and went to the living room to look for Yu Tu.

The nine o’clock morning sunlight landed in front of the French window. Yu Tu was sitting on the sofa on the other side and looking attentively at the computer. The pace of Qiao Jing Jing’s footsteps paused for a moment, because she felt that this scenario was somewhat unbelievable.

Yu Tu lifted his head to look at her. “Finished eating?”

Qiao Jing Jing nodded, a little surprised. “You even brought over a laptop?”

Yu Tu made a “hmm” sound and waited for Qiao Jing Jing to sit down before asking, “Who was teaching you before?”

“Cai Wenji and Sun Bin were taught by him?”

Qiao Jing Jing nodded. “He told me to play as support, but later, after playing with you and the team, I feel that Wang Zhaojun is more suitable for me.”

Yu Tu pondered for a moment. “Have you ever watched a professional competition?”

“Then watch a few matches first.”

Yu Tu clicked open a video on the laptop. “This is the finals from back in the first half of the year. Luo Shen against CS.”

“I know about this. Big sister Ling used my account to forward it in Weibo.”

“I was filming out in the middle of nowhere, where the signal was very bad.”

“Then watch now.” While they were talking, the two finalists in the video had already ended the Ban and Pick Phase and entered the map.

The first half of the year’s finals played the full seven matches, and nearly every match was exciting. After continuously watching three matches, Yu Tu pressed pause and asked Qiao Jing Jing: “What do you think?”

Sure enough, she was asked to share her insight and what experience she had learnt!

Qiao Jing Jing mulled this over before answering, “They all don’t die very often? It’s not like us, where when we fight, we chop off dozens of heads.”

“They understand their damage ability very well, whether they can fight or not and whether it’s worthwhile to fight. They won’t so easily just form a group.” Yu Tu said, “Did you notice Zhuang Zhou in Luo Shen’s battle team?”

“The one who fought Zhang Fei in the first match? The commentator talked about him many times.”

Yu Tu nodded, “At the beginning of the second game, Zhang Fei was banned. That’s why, actually, the support position is very important. Sometimes it is also the commander of a team.”

Therefore, A Guo’s previous words where support was easy to play was not quite right?

“My skills playing as support are very much only so-so …. So can I play Wang Zhaojun?”

Yu Tu did not directly reply. “I saw that you are already in the Gold rank for casual matches (ranking from low to high: bronze, silver, gold, platinum, diamond, star, strongest kind and king of glory). Did you go and play by yourself?”

Qiao Jing Jing was very pleased with herself, “Yes ah, I also took many MVPs (Most Valuable Player).”

After pondering about it, Yu Tu handed his mobile phone to her. “Use my account to try and play a ranked match.”

Qiao Jing Jing did not understand what he meant, but still, she took the mobile phone and clicked open Yu Tu’s diamond rank account to enter the single ranked match. She successfully picked Wang Zhaojun, who she had been training very hard on.

She put down the mobile phone, looking a little pale. This match was not finished yet. Her teammates were actually very good-natured. But they kept shouting catch phrases: “Develop humbly, don’t act rashly!” (During the game, the line is used to warn teammates to keep a cool head, not put themselves in danger or challenge an enemy too strong for them.) “Hold on! We can win!” (This is usually used to boost morale when your team is in critical condition.)

The rough meaning of this was for her just to not give away any heads.

She handed the mobile phone over to Yu Tu.

Yu Tu took the phone, controlled Wang Zhaojun to go back under the tower and developed her in a low-key manner.

As he lowered his head to play on the mobile phone, he also calmly stated, “You previously played very well in the Gold rank matches, but you’re having a hard time playing in the Diamond rank matches. The competition you’re going to participate in has professional players, so the difficulty level will be higher than now. Before this, I didn’t know about the situation you’ll be facing, so I thought it would be enough to play Wang Zhaojun well. But in reality, Wang Zhaojun is simply not good enough to play in a professional competition.”

Qiao Jing Jing pursed her lips, her mood a little down. When she called Yu Tu to come over, it had actually been more on a whim. Only now did she know that it really was needed.

“I knew if your ranking is different, it’d be difficult, but I didn’t expect it to be so different.” She mustered up her spirits and asked earnestly, “What am I going to do now?”

Yu Tu looked at her in surprise and said very simply, “There is still a month left. You rely on yourself to reach the strongest king (conqueror) level.”