I have come to the decision on whether to recap this show. Instead of doing detailed recaps, I will be doing a highlights recap from episode 4. You probably can follow the general gist of the drama from them, but it’s more of a place for me to share my thoughts/rants.

thehungryegghead is doing recaps of this drama on her blog. I am not sure if she will be continuing it, but they’re definitely faster than my updates! She has already recapped up to Episode 6.

Liu Wenzhuo leaves in a huff and meets his sister storming up in a similar huff. The sister is unhappy that Yuanbao is getting married. To her, she is the one who is childhood sweethearts with Yuanbao (not sure if Yuanbao shares the same view), and their aunt even promised in the past that she would let them get married when they grew up.

But their conversation soon takes a turn to show us that perhaps, girl cousin is not so much in love with Yuanbao as  much as they no longer want to be in no-man’s land: neither servant nor master. She wants to marry Yuanbao so their position will be firmly established within the Jin family and also use the connection to rebuild their Liu family.

And then the true shadiness of Liu Wenzhuo is revealed. In an exchange with a man in a bamboo grove, we come to know that he’s the mastermind behind the pickpocket and Chor Chor.

Qilin tries to enter the Jin Mansion, this time disguised as a Persian dancer bringing a wedding gift. Unfortunately, her plans were foiled yet again.

Ok, more lecturing from Mommy, this time in front of the ancestral tablets. Oh dangabits – there is an imperial fighting for the throne storyline after all because Mommy says that the Empress Dowager was left with no choice but to make an alliance between the Jin and Jiang families, to support the Crown Prince against his younger brother, the treacherous Second Prince. Yuanbao points out that you can’t guarantee national security with a marriage alliance; he vows that he will find evidence to bring the Second Prince to justice.

Speaking of which, apparently Villianous Cousin is in cahoots with an even bigger villian, ie the Second Prince. His Highness is not happy with how his evil schemes have been wrecked. Evil and Eviller hatch a plan to prevent the marriage alliance by killing Jiang Xiaoxuan.

Both our leads decide that a visit to the inn where Miss Jiang is staying in is in order. Qilin wants to sneak into the the Jin Mansion under the cover of the wedding party. Using her l33t martial skills, she gracefully jumped over the wall. Yuanbao also planned to enter the premises the same way, except success eluded him. They say a picture paints a thousand words so I will let a screencap inform you of the outcome. Let’s just say, he gained entrance in a less dignified way – Doggie was not happy to share the same entrance/exist. 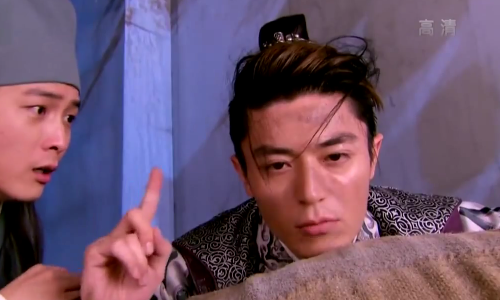 “Whatever you’re about to say, don’t say it.”

Poor Miss Jiang really doesn’t want to get married. She’s in love with a poor scholar who hasn’t been in contact. She was in the middle of a very lady-like fit when Qilin fell from the roof in the bathtub. In the commotion, Miss Jiang took her pre-packed bundle and ran off leaving Qilin to first deal with Evil Cousin here to assassinate Xiaoxuan and then with Yuanbao who proposes a marriage of convenience. 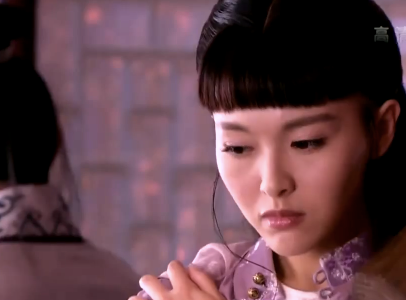 Xiaoxuan’s absence and the commotion leaves Qilin trapped in Xiaoxuan’s room until wedding day. She had already pretended to be Xiaoxuan, so without any other choice of leaving, she impersonates Xiaoxuan, which suits her find because who else is more qualified to strip Yuanbao on their wedding night?

Villain Cousin finds Chor Chor in his rooms. Chor Chor begs him to help her escape. After a prolonged sob story scene, Villain Cousin suddenly knocks Chor Chor unconscious. He presents a bloody hairpin to his contact with the Second Prince and promises Chor Chor will never appear again.

But wait! Chor Chor’s alive! She finds herself in a horse carriage running to goodness knows where, with money and a note telling her never to return to the Central Plains.

Off to the wedding we go. Our poor Qilin’s so hungry she’s taken to stuffing food inside her sleeves, except they all come rolling out when she makes her bows. Note: Might need to do a gallery of WH’s WTFerry expressions later.

Wedding night a.k.a. operation strip Yuanbao. He makes her dance for him (I’m not sure what is the acting direction, it might just have been “Tang Yan, dance like you’re marching a dance”), they play drinking games. Of course, in a pattern that is well established, she outdrinks him. 😛

Both wake up the next morning feeling all sorts of awkward. They start berating each other, than Yuanbao sees the bloodstained white hanky he wiped his nosebleed earlier (from Qilin’s punch) and assumed that They Did It. This HAS to be the best scene in the show so far. Jiang Xiaoxuan’s maid comes in to hurry them because they have to pay their respects in the morning. Mommy’s servant goes into the room and finds the same hanky and pretty much comes to the same conclusion.

Meanwhile, Jiang Xiaoxuan doesn’t seem to be getting anywhere with her search. In fact, she nearly gets robbed and raped. Luckily, Gu Changfeng is at hand to save her.

Is anyone surprised that our darling Qilin mucks up the tea serving ceremony. But her mom-in-law is so happy to drink tea served by her daughter-in-law that Qilin could really do no wrong.

The production value seems to be a bit inconsistent in the first three episodes. The lighting is often too harsh, especially the night scenes.

Wallace Huo looks like he’s having balls of fun as Yuanbao but Tang Yan still seems to be a bit awkward around the ages. The first three episodes actually progressed pretty speedily with them married by the end of it; there were a lot of laughs and gif-able moments. It sets up the heroes, villains and sidekicks pretty clearly, although it seems to be trying to persuade us that Liu Wenzhuo actually has aheart.

But I think many of us are a bit disappointed with the writing. Perhaps it was a case of mismanaged expectations. The story feels shallow with a lot of a cheap laughs, if they didn’t tell us it is Tong Hua, I would never have guessed. However, the trailers, opening and ending themes does show some angsty scenes. I guess we’ll just have to wait and see.