In addition to Yang Zi and Li Xian, who will be playing Tong Nian and God Gun in the drama Go Go Squid! (adaptation of the novel, Stewed Squid with Honey), we find out the actors for three more characters.

The official Weibo of the drama has been trying to hype us up for the last little while on who the actor for Dt will be. Yesterday, they finally did the big reveal. The actor for K&K’s captain, Dt, also known as Wu Bai (or fondly referred to as Little Bai by Gun and others) is… Hu Yitian! This one caught everyone by surprise! He is actually said to be guest-starring in this.

The other two confirmed cast are Li Zefeng as Solo (Wang Hao) and Li Hongqi as Xiao Mi (Mi Shaofei), who are shown in the left and right photos, respectively, up above. 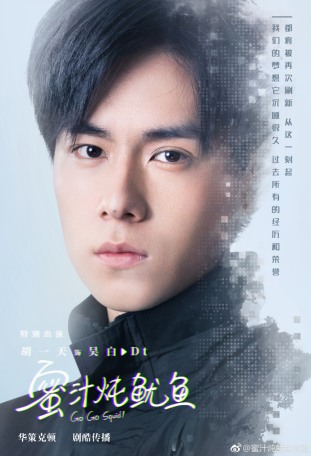 Previously, Mo Bao Fei Bao, author of the original novel and screenwriter of this drama adaptation, had said Go Go Squid! would cover the entire trilogy (God’s Left Hand, Playing Fish Trapped in the Sealed Chamber, and Stewed Squid with Honey). However, Mo Bao Fei Bao clarified that statement yesterday. Yes, she had pulled all three stories together (because Squid is too short as a standalone adaptation), but then she re-split them into two separate scripts. Go Go Squid! ‘s story is going to include all of Stewed Squid with Honey and about the last 1/3 of Sealed Chamber. That is why Dt’s role is relatively small and Hu Yitian is only acting in this one as a special guest.

As a side note, she also said the script for Sealed Chamber‘s adaptation is going to include God’s Left Hand, the remainder of Sealed Chamber, and the eSports world championship that was never given a conclusion in her novels. That means, I’m interpreting, that we can expect another adaptation coming out for Sealed Chamber eventually. 😉 (However, whether the actors who play Dt, Solo, etc. are going to be the same as in Go Go Squid! is still a question.)