For fans of Three Lifes, Three Worlds, Ten Miles of Peach Blossoms who miss the book and little dough. Also, for fans of Three Lifes, Three Worlds, The Pillow Book who are patiently waiting for the English translation. A big thank you to hamster for translating both books to English. I found some mini specials and want to share them with fans of both books. I can’t read Chinese so there might be errors or omissions in my translation, so please don’t lodge a complain:) If you want to rant or rave about the books, you can come & visit peanuts at the book bar. Hope you enjoy them !

This year, it is popular to organise beauty pageant in Jiu Cong Tian. Every year, the most beautiful one will be selected from beauties from all corner of the universe.

Little dough consulted Siming Shenjun: “My mummy is really not as beautiful as sister Feng Jiu?”

Siming Shenjun : “No, it is because your dad only acted as a judge for one year, whereas Dong Hua Dijun served for four years.”

Cheng Yu hastily came to look for little dough: “There is good news and bad news to tell you. Which one do you want to hear first?”

Cheng Yu: “Dijun bestowed Gun Gun to your father as your marriage partner.”

Cheng Yu: “So, now you understand why I say this is bad news …” 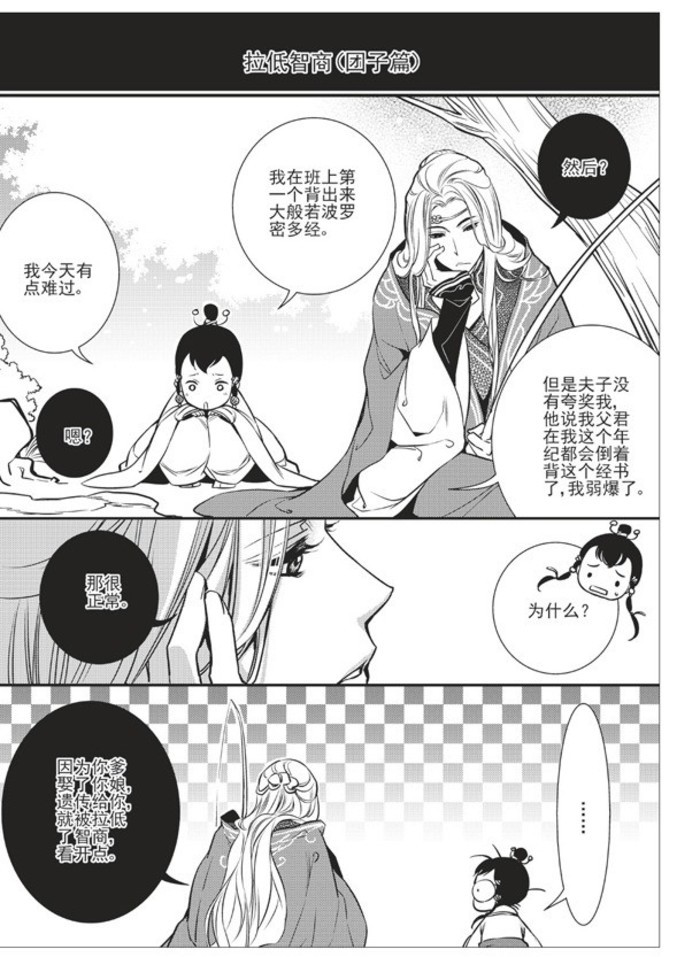 “I was chosen as the first one in the class to come out to recite the Buddha scripture.”

“But the teacher did not praise me:( He said my father can recite the scripture back to front at my age. I blew out”

“Because your father married your mother who passed on her gene to you, so it dragged down your IQ”

One day, little dough consulted Dong Hua Dijun: “My mummy told me that I must become a good-hearted person. Only with a beautiful soul, there will be plenty of beauties who will like me in the future. Brother Dong Hua, you like sister Feng Jiu because her soul is very beautiful? ”

Dong Hua: “I like her very beautiful appearance.” Paused: “So you should strive hard to become handsome, this is most important.”

Little dough had a heart to heart talk with Dong Hua: “Recently, I increasingly dislike my father. He always monopolizes my mummy to the extent that I do not get much opportunity to sleep with her. Don’t you think he has gone too far?  She is my mummy, not his mother!”

Dong Hua: “If I am your dad, I will send you to Mount Kunlun for apprenticeship, only let you return once in every ten thousand years. Your father is too soft-hearted.”

Someone asked the little dough what was his reaction after hearing that.

The little dough did not have any reaction.

That is because the little dough was scared to tears 😦

Not long after, Dong Hua and Feng Jiu got married.

Feng Jiu: “You are not afraid, I will drag down the IQ of your son in the future?”

Dong Hua: “I worry, but I calculated, even if you drag it down, he will still be above average.”

Dong Hua: “But I will not be able to sleep.”

Dijun: “You cooked sweet and sour fish for Su Mo Ye to eat.”

Feng Jiu: “Tomorrow, I’ll also cook for you to eat.”

Dijun: “Somemore you danced for him to see.”

Feng Jiu: “Tomorrow, I’ll also dance for you to see.”

Dijun: “You went on a date with him but did not bring me along.”

Feng Jiu: “Stop complaining. If you are so unahppy, you can also go and dance for him to see, go on a date with him without bringing me so we’re even!”

Don’t know where Dong Hua heard that Feng Jiu has good cooking skill. He called her to come every day to cook for him.

Finally Feng Jiu could not withstand and revolt: “Although Dijun has a highly respected status, I am also the female monarch of Qing Qiu. So, it is inappropriate for someone like me to go and cook for you.”

Dong Hua: “Oh, then you have to learn to accept it.”

After a long time, all the female immortals in heaven collectively get a day off on International Women’s Day.

Dong Hua Dijun asked His Royal Highness the Prince for a day off from participating in a function on the ground that: “Today is International Women’s Day, so I have to wait on Xiao Bai (Feng Jiu), cook, and look after the children.”

Feng Jiu said: “I usually have to wait on you, cook and take care of the children as well, so how come I did not take leave?”

Recently, Dijun has toothache and Xiao Yan wanted to go and laugh at him.  He heard Feng Jiu has made plenty of plum parfaits to entertain him. But he did not see even a single piece while he was drinking his tea so he asked Feng Jiu: “Where is the plum parfaits you made?”

Feng Jiu: “Dijun has finished them all.”

Xiao Yan: “Didn’t he have toothache?”

Feng Jiu: “He endured the pain and the possibility of breaking his tooth to finish eating them.”

Feng Jiu: “He said eventhough he has toothache, you should not even think you can fare any better …”

Dijun, you killed your enemy 800 times but self-injured yourself 1000 times. (帝君你真是杀敌八百自伤一千)